Looks like the new team revitalized development of the old, stale codebase...

The new release can be downloaded at the following URL: http://www.midnight-commander.org/downloads

Changes in the core

September 9, 2009: Total Commander 7.50 FINAL is available now! There are many new functions. The most important are:

A very interesting SCP/SFTP client. Since September 2003, WinSCP is also available as a plugin to the FAR file manager.

WinSCP is an open source free SFTP client and FTP client for Windows. Legacy SCP protocol is also supported. Its main function is safe copying of files between a local and a remote computer.

Table of Contents  Commander Interface is based on Norton Commander (and similar file managers). A local folder is displayed in the left panel and a remote folder in the right panel. Files are usually transfered between these two folders, though it is possible to transfer files into a different folder. This kind of user interface is also known as Orthodox File Manager.

GNOME Commander is a fast and powerful graphical file manager. It has a "two-pane" interface in the tradition of Norton and Midnight Commander. It features drag'n'drop, GNOME MIME types, FTP, SFTP, and WebDAV using the GnomeVFS FTP module, SAMBA access, the ability to extend the context menu with entries to call external applications or scripts on the selected items, quick device access buttons with automatic mounting and unmounting, a fast file viewer for text and images, a history of recently accessed folders, and folder bookmarks.

Midnight Commander is a visual shell much like a file manager, only with many more features. It is a text mode application, but it also includes mouse support if you are running GPM. Midnight Commander's best features are its ability to FTP, view tar and zip files, and to poke into RPMs for specific files.

Necromancer's Dos Navigator is a "Norton Commander" clone. It uses a well known text-mode interface, is highly customizable, and has a lot of features. Its key features are a text editor with syntax highlighting, horizontal/vertical blocks, multiple codepages, undo/redo, bookmarks, powerful searching, and regex; a file viewer with text view, asm/dump/hex edit, raw blocks, header viewer, search, regex, and unlimited filesize; a powerful filepanel with higlighting, VFSs, and filefind with textsearch and regex; a calculator; and more.

Changes: The internal desktop version handling was improved. A C interface library was added for future additions. The FTP VFS was enhanced and now also works in DOS. The "External Quick... Directories" feature was added. The socket interface used in NDN is publicly available on the homepage

Depending on when you got started with computers, you've probably used an orthodox file manager. They're zippy, they're often favoured by those who are more comfortable on the command line, and enable you to do more via keyboards than some can do with a mouse.

The interface is made up of two panels, which you can switch between with the Tab key. Norton Commander inspired a whole bunch of orthodox file managers, many of which are still actively developed today.

Anyone who started with Linux in the 90s will have used Midnight Commander. But does it make sense to use it or any of its brethren in the age of multi-core desktops? The answer to that question is a most definite yes.

In the 90s the Linux GUI was a far cry from the present-day Compiz-laced bells and-whistles graphical interfaces and there was no Konqueror and Nautilus. But you didn't use an orthodox file manager just because it was lightweight. You used it because it worked, and with a couple of keystrokes could compress a file, generate an MD5, and copy it across the galaxy.

The modern day OFMs build on that, and can do a lot more. They can still be used with only minimal mouse input, thanks to their extensive keyboard shortcuts. And just because you use them with a keyboard, doesn't mean they all run from the console. And you can easily spot an OFM, since many honour their lineage by including the word 'Commander' somewhere in their name. Ten-hut!

Lfm and Pyview are written in Python and require curses module. It needs Python v2.3 or higher, it won't work with older versions.

All modern UNIX flavours (Linux, *BSD, Solaris, etc) should run it without problems. If they appear please notify me.

Note that python curses module should be linked against ncursesw library (instead of ncurses) to get wide characters support. This is the usual case in later versions of Linux distributions, but maybe not the case in older Linux or other UNIX platforms. Thus, expect problems when using multibyte file names (f.e. UTF-8 or latin-1 encoded) if your curses module isn't compiled against ncursesw. Anyway, I hope this issue will disappear with new releases of those platforms, eventually.

Last File Manager is a simple but powerful file manager for the UNIX console. Based on curses, it's written in Python.

Some of the features you can find in lfm:

Addition: GNOME Commander
GNOME Commander is yet another powerful twin-panel file manager for the GNOME desktop environment, with support for Samba networks and FTP. It also has an option to start it as root (the same as gnome-commander or gksukdesu gnome-commander, not recommended though).
Official website 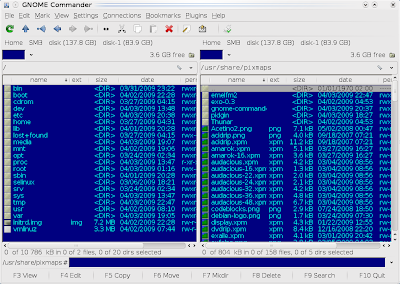 The Midnight Commander file manager developers have restarted work on the, once quite popular, file manager for the Linux/Unix console. Midnight Commander was inspired by the famous Norton Commander for DOS. In recent years, there had been no development at all, but now a "Bugfix Release" 4.6.2 has been made available. The new release, as the tag suggests, contains no new features.